Saturday was a good day to check on our neighbours. 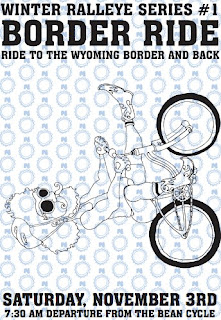 I hadn't done a Winter Ralleye ride in 4 years...and missed it.  It's one of the great things about Fort Collins, with a great culture and tradition, bringing out a great group of folks that really like bikes.

The first ride in the series takes us up to the Wyoming border.  Last time I did it, we took dirt roads to the non-descript line that separates us our electoral college votes.  I took my road bike, and had been riding a ton, so it was both leisurely and easy to ride at the conversational group pace.

Things were different this time, with a route that now goes through the relatively new Red Mountain and Soapstone Prairie Open Spaces.  That means singletrack!  That made my personal bike selection easier, since it would give a good excuse to ride my new mt. bike for my longest knobby-tire ride ever, with the border being 90+ miles roundtrip from my garage.  It would also be a solid challenge.

I arrived at the Bean Cycle at 7:30, and chatted with some folks. 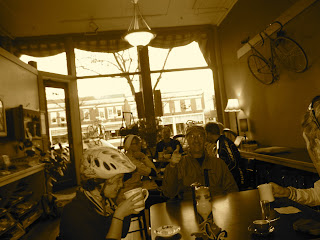 With a nod to Daylight Savings Time ending, we had ample time to grab coffee, and actually gathered up to start riding at 8:30.
It was neat to see the various steeds stabled outside.  Fat tires were the minority, as were derailleurs. Cross bikes were the perfect and popular tradeoff. 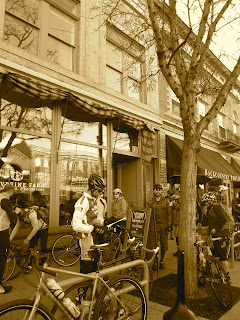 A bit of warming sun was appreciated as we headed out on the bike path. 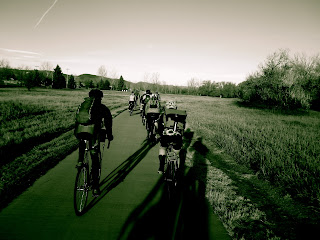 We then formed a group heading North, clipping along at an effectively modest pace.  I was glad to catch up with an old friend, Joe, whom I haven't seen in a few years.

Still, the extra work of knobbies, left a little bit squishy for dirt riding, and my lack of riding put me squarely in the back of the ragtag peloton.  Messenger bags and fixed-gear riders were moving along more seemingly with ease, while my miles and miles of running up and down hills and around tracks weren't really helping.  I loved how that irony smacked me in the face.  We did stop for a break to keep the group together and check on everyone's safety, before pedaling on the rolling dirt hills to Red Mountain. 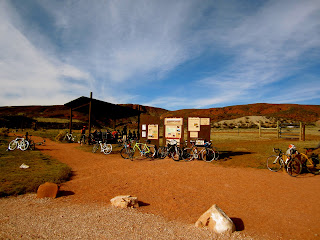 As we took our lunch break, people took stock of which route they wanted to take.  The shorter, more direct option would be trail straight over to Soapstone.  The other option, about twice as long, would wind along a redstone wash before climbing up and over the border, then descending back down on Mahogany and Pronghorn trails in Soapstone.

Seven of us opted for Option B, which is why I rode my damn mountain bike that whole way. 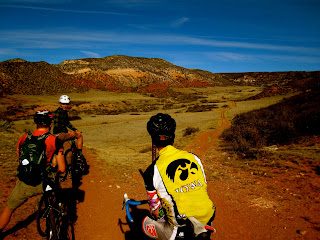 Despite a non-trivial ascent and descent, and riding through sandy washes and twisty singletrack, most of the other riders had skinny tires; the only other fat tire bike besides Joe's and mine was a singlespeed (ridden by a former national collegiate omnium champ).  Most or all of these guys raced -- successfully -- but I only found that out in bits and pieces, and by witnessing their skillz.  This was all about playing around and having fun.  And in a sport filled with expensive equipment, it's refreshing to see some really good riders hiding in plain sight.

The trails were in great shape and rattlesnake free; the temperature was perfect; and the wind was complacent.  Even more fun, there are little off-shoot trails, and this place is still relatively unvisited, so it feels more like an exploration when riding next to redstone walls. 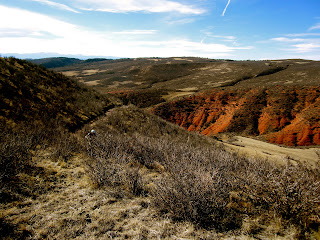 The trails peaked at a switchbacking climb somewhere in Wyoming, and then we had a smooth blast back down onto the prairie. As usual in those situations, I don't have good pictures because we were too busy grinning and sailing down buffed singletrack. 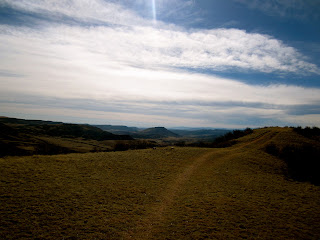 After this fun was done, we ended up just minutes ahead of the rest of the group -- perfect timing.

The ride home, with an uncharacteristic southernly headwind, was a bit of a grind for me, but pedaling with the group helped.  I didn't have a chance to stop at the bar afterward, but otherwise enjoyed a great re-introduction to fun biking adventures. 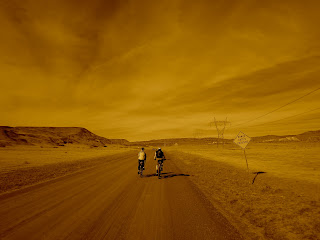 Posted by mike_hinterberg at 8:17 PM