Our friend Jenny was getting married in Kansas City, MO this weekend, so we made a quick driving trip out there for the weekend. We had a great time at the wedding, talking with Jenny and her husband Tom; her VP sister Katie (that is, "Very Pregnant") and Dr. Charlie; Uncle Ray and his family; Jenny's parents; and some new folks. But, this blog is about running, hiking, etc.....
The weather looked great, and glancing at the calendar, we noticed a 4-mile race at the KC zoo. Sounds like fun!

This was the 6th year of the "Kansas City Zoo Run" race, with each year highlighting a different endangered species. This year was chimps, and it sounded like a fun way to see the zoo. Plus, while generally weary of too much mixing of charity and running, this mix seemed like a sensible way for the zoo to offer it's assets (well-maintained roads, beautiful landscaping, and a fabulous volunteer and work staff) for charitable purposes. And...a cool t-shirt!

Well, sort of. They ran out on race morning, which might testify to either lack of preparation, or overwhelming demand -- but in either case, the shirts are (still) in the mail. The logo was designed by a 6th-grade student, who was honored after the race -- fantastic!

So, the race itself...I won't bore you too much with turn-by-turn age group competition reporting, but I will briefly describe the race itself, should you ever find yourself in the area. OK, a little personal background: I set a goal of < 25 minutes, with the idea being close to 6 minute splits as possible. This timing will give you an idea of the course difficulty, or at least my perception. I hadn't run any sort of speedwork since July, so I quickly did a couple workouts the previous week just to make sure I remembered how to run < 6 min miles! Anyway, the front of the race had some singlet-wearing high school and college racers, both from the KC area as well as Lawrence. Other than that, the crowd was quite large, with people of all ages and sizes, a good vibe in general.

The race begins on a zoo road with a nice downhill. I stayed conservatively on pace; if nothing else, it would be a moral and mental victory to pace off some even miles. The downhills kept coming, though, and eventually the first mile: just a couple seconds short of 6. Sweet. Feeling comfortably good, but with at least a dozen or so people in front of me, I stayed relaxed and enjoyed the scenery, smiling and thanking some of the volunteers. As we finished the 2nd mile, I glanced at my watch: 12 minutes flat. I was feeling good, but now were were getting into some narrow trails near different animal houses ("Australia" and "Africa" being their own large sections). The turns took away momentum and speed, but so what, it made it more fun: 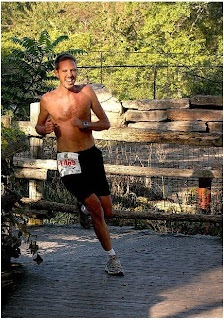 But, on the clock, my 3rd mile clocked in around 6:20. So, if you're running this race, I'd suggest being more aggressive on the downhills, since the 3rd mile will suck up some time...

But not too aggressive. The funny thing about a 4-mile race is trying not to blow up after 3.11 miles that many people are used too. I was still feeling relaxed, though, and ended up passing some folks. The last turn and I could see the finish line, as well as the top female. I had a bit of a kick left but was still a good distance behind her (a talented KU runner), and ended up...where I ended up. In the arbitrary nature of age groups and such, I ended up winning a token chimp award for my efforts, which I do appreciate as a keepsake.

So, if you're in Kansas City in mid-September, keep the zoo race in mind!

Other tips:
* McCoy's Brewpub patio in downtown KC (by the Plaza) had great food (broccoli mac 'n cheese!), beer (award-winning brown ale) and atmosphere.
* Hays, KS is about halfway there, and itself has a way better brewpub than you'd expect from a town that size:
Gella's Diner and Liquid Brewing
A few more words on this one: besides a great, diverse, fresh menu, they just tapped Kolsch the day before:

which is one of my favorite styles. This one was excellent, and I dig the graphic art job. I also dug the atmosphere and cool merchandise. Finally, our food was awesome, and I think anything would go well with their sunflower pesto. Local, I love it.
Posted by mike_hinterberg at 8:20 PM