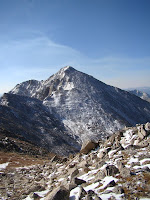 But nothing’s ever as good
As when you’re on top...
I want to wake up / And just start running
Into a ditch / Or straight up a mountain
I want to get / Where no one been gettin’
Make it deeper than hell
Or make it higher than heaven
Jakob Dylan, The Wallflowers "When You're On Top"


'Twas the last week of September, and a BFH ("Big Fat High") was coming through Colorado, so it was a good weekend to head to the mountains, check out some of the foliage, and climb something high. So, at oh-dark-30 (actually, 2:45AM) Saturday morning, we headed up to the Sawatch for the 3rd time this year to hiking sumpin' fun: Brown's Peak and Huron Peak.

Huron Peak is an easy 14er, with gorgeous views of numerous other 14ers and no paved roads. The standard trail is a class 1 walkup, around 2 miles from a high 4WD trailhead, and can get crowded in the summer. But that wouldn't be very interesting, would it? Instead, our plan was to ascend via Lulu Gulch, climbing Browns Peak along the way.

The drive out was uneventful: the sky was perfectly clear, and the low over Fremont pass was 24 degrees(!). We arrived at the South Winfield trailhead with just a tiny hint of dawn, and 30 degrees, but the day would get warmer as soon as the sun started clearing the mountains to the east. There was only one other car at the trailhead, a big change over the summer. We took our time getting ready, eating breakfast burritos, and generally allowing the sky to lighten, which saves headlamp weight and space (more burrito room) and wards off bears and lions (according to Jess). 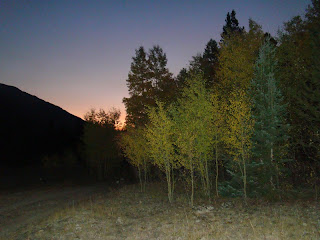 So we actually started hiking around 6:30. We began down the main road, before taking the first left at 0.4 miles and switchbacking upward. Soon, we began to see the aspen on the mountainsides, surprisingly a bit before peak for late September: 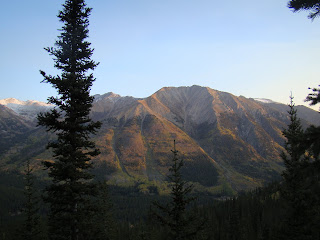 This spur 4WD road continued long switchbacks until treeline, when Lulu Gulch and the Cirque from Middle Mountain to Brown's Peak was in view. At this point, we were to leave the road and find our own route up to the ridge along Brown's. Jessica picked our ascent route, a mixture of scree and tundra. 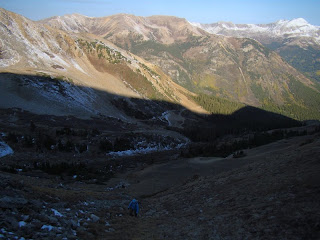 As we were in the shaded, west-facing aspects that still hadn't seen sunlight yet, the ground was still partly frozen. Rather than being icy, however, it kept it from being loose, so it was quite pleasant to ascend this route in this weather.

Next up was some boulder hopping from the saddle up to Brown's: 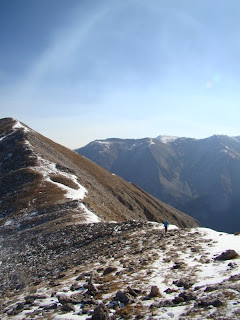 Full disclosure: Up until now, we couldn't even see Huron. Before this, in fact, I was arguing with myself as to where the hell Huron was, and after all this work, Jess didn't seem amenable to the mountain in front of us (Brown's) being a 'false' summit (if a separate 13er can really be a false summit). Well, either way, we had to make it up to Brown's, and then we could discuss further plans.

We made it to the top of Browns and had it to ourselves. There was a sparse summit register there -- one or 2 signatures per week during the summer -- and gorgeous views all around. Did I mention we hadn't seen a soul yet all day? Well, at this point, we could finally see Huron, as well as a few folks on top of it. This route was worth it not just for fun scrambling, not just for solitude, but also the sweet perspective of Huron that we'd miss from the standard CFI trail.
To get there, we had about half a mile to go, with about half of that scrambling over the snow-dusted ridge, before joining with the standard trail for the final summit push.
From this vantage point, covered in snow, Huron actually looked kind of gnarly, even given its easy reputation. Jess didn't like the looks of it, as the obvious trail was a ribbon of snow that seemed to go straight up. Either way, though, we needed to proceed to the saddle between Brown's and Huron, join with the standard trail, and then make our decision.

As we moved toward Huron, we took a cautious route to the right/below the top of the ridge. The snow was only a few inches deep, but slowed us down a bit. As we rounded a corner, with Jess slightly out of view, I heard a loud thunk that made my heart skip a beat. It turns out, Jess leaned on a decent-sized boulder at shoulder level, and it actually rolled out toward her! She got out of the way in time, but bruised her left hand in the process. This was especially unfortunate as we continued traversing the right side of the ridge; i.e., the left hand was frequently needed for balance. She shook it off admirably and kept at it, as we proceeded through the boulders to a flat spot where we could intersect the standard trail.

Jess took a more cautious approach slightly downward toward the trail, whereas I'm quite miserly with giving up gained elevation. I intersected the trail a couple switchbacks above her...
And that's when I did the stupidest thing I've done on a mountain.
A pure stupid, stupid rookie mistake.

I set my backpack down to take some pictures. Due to the snow and angle, there was just enough gravity to cause my pack to start sliding...
and then rolling...
and then rolling...
I watched it, entranced, willing it to stop, as it would slow down near a rock, then roll around it, and start picking up speed. It crossed the trail twice, and started getting near another hiker. I was preparing to call it out in warning, when it finally, mercifully, stopped.

The hiker (a friendly German ex-pat) retrieved it for me, as I cruised down past Jess to meet him.
I apologized profusely at my own stupidity (and having it been witnessed), and for small possibility, not realized, that he could have been endangered by my rolling pack or his own effort to retrieve it. I'm sure I've set my pack down dozens of times while skiing, but usually cut my skis below the pack above me (and maybe I have rolled it and just forgot, as skiing down to retrieve it isn't a big deal). Lesson learned, and shared here...

I turned around and met back up with Jess -- I will admit to enjoying a bit of extra-credit heart-pounding descent and re-ascent -- right as the switchbacks ended, and the snowy ascent began. This would have been a good time for Yak-trax or the like -- the very same ones we were looking at in the store the day before, perhaps -- but it was still manageable with some scrambling (on what would normally be a walk), aiming for one rock at a time. We were uncertain of the downhill awaiting us, as we watched one guy biff a few times as he descended.

Finally, the summit was achieved: 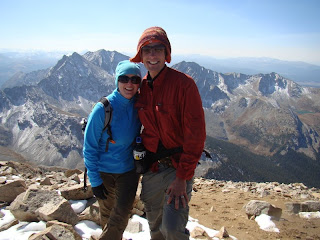 We were greeted by 2 women (first 14er for Mom), a dog, and perfectly blue skies. After taking our picture, the ladies left and we had the peak to ourselves for a few minutes -- quite a difference over the summer, I imagine.

Jess's mood improved, and she seemed genuinely happy on her 2nd summit of the day. Here, I must add that it was 2 days before our 7th anniversary, and I could not be happier sharing such a beautiful day with the person I love most in the world. 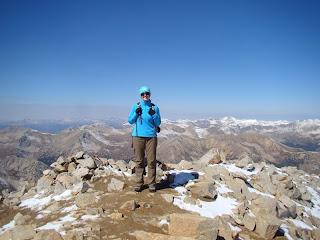 Soon, the German gentleman and his partner arrived, and we exchanged pleasantries.
We took some more pictures; ate some breakfast burrito and zucchini bread; and I fired off a cryptic text to my brother-in-law. Then, we began the snowy descent down the standard trail. 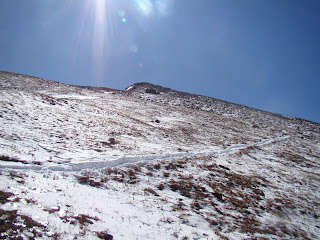 We passed maybe 4 or 5 folks coming up -- man, it was such a gorgeous day! -- and the snow soon gave way to mud. The views in the valley at the bottom were also spectacular, we were quite pleased with our choice of a loop route.

Now, we did have a bit of schedule in getting back down. We weren't rushed, but if we had no commitments, I would have loved to take a nap out in the meadow. That's how gorgeous and non-threatening this September day was. Alas, we trudged on down a million switchbacks on the standard trail, until finally intersecting with the 4WD road.

We arrived back at the car, still guarded by flaming yellow aspen 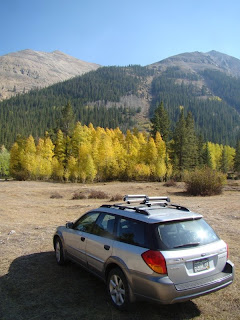 and headed back home, about 8.5 hours since we started. I would estimate the snow slowed us down by approximately an hour.

In summary, the Lulu Gulch route is a fabulous alternative to the standard route on Huron. I would consider it equally fun for ascending or descending when doing a loop with the standard route.
Posted by mike_hinterberg at 8:29 PM