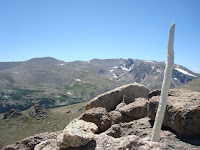 
I was finally starting to feel recovered from Leadville, anxious to run somewhere in the mountains again, and the weather was looking good. And, ideally, I wouldn't have to use the car.
Earlier in the week, there was a bit of discussion on the FC trailrunner list about Comanche Peak wilderness. While I'm more familiar with the north/Pingree Park/Poudre side of Comanche, someone mentioned the North Fork trail as being a good option. In this case, the North Fork being the "Big T", a river which I've ridden next to countless times and have awe and respect, but don't have much experience with the river away from Hwy 34.

Here, I'm going to jump ahead to get the negative part out of the way, so that the rest of the story is all positive. I arrived back at the trailhead about 4.5 hours after starting, longer in time and distance than I planned but a fun route overall. My bike was happily unmolested and the tires were full of air. After a quick shoe change, I bombed down the dirt road on the road bike, ~30mph with barely room to think. I honestly think I was more aggressive mainly because I had just been running, slowly, and it was nice to cruise without pedaling. I almost lost it on the last corner, as there was too much sand in the corner to brake comfortably, but I needed to stay on the road! Luckily the skinny tires held up and I was on my way. As it was now mid-afternoon, some clouds were threatening from the west, so I tried to 'hurry', as much as I could. The rain held off in the canyon, but not the idiots: a gaggle of tourists were pulled over for bighorn sheep pics, including one minivan parked into the shoulder/traffic lane (with the family still inside, taking pictures, too lazy to park legally and walk); shortly after that, some guys went by thinking it was funny to blast an airhorn at riders as they went by. I made it to Loveland without rain, but then lightning started coming, with a mile to the East. Again I hurried, and on one of the country roads, with no other cars and myself hurrying to avoid lightning on the edge of the road, a car honked at me and tapped the brakes, unsure of how to share the road competently with some guy trying to stay out of the way and get home safely to his wife. So after a fabulous day, I was in a bit of a foul mood. I think many of the anti-cyclist motorists really cannot fathom riding a bike on the road, and believe that only people on a bike stand out as inconveniencing their ride for entertainment, not admitting that they themselves are nearly all of the time driving for fairly useless errands. They lack the experience and imagination to realize that I very well could have driven a car to the trailhead instead, at the cost of clogging the road up even more as well as other negative economic externalities (increased road/maintenance cost, pollution, statistical accident threat to them). Why not honk at all the joyriders and tourists clogging up the road instead? Or people driving a few miles every day to work? Because somehow skinny guys on skinny tires and 20 pounds of bike stick out more and are easier to harrass. I'm not trying to prove any point or anything, I pose no risk and just want to be left alone to ride safely, I just like to ride my bike and stay the heck out of the way.
***
Back to the beginning....
The ride there was fairly uneventful, I strapped most of my extra weight (trail shoes and clothes) under my seat, and this kept most of the weight off my back. I arrived at Dunraven Glade Rd in a couple hours, and finally got a chance to ride something new. I knew it was a couple miles or so up the road, and I vaguely recalled that it was an unimproved road. Well, it's a 2.3 mile grind up a hardpacked, washboarded dirt road, and I couldn't even muster double-digit speeds. Given the choice again, though, I wouldn't hesitate to bring the road bike, as this was only a small part of the ride. Still, it slowed me down from my estimated run starting time, as well as fatigued my legs more than I anticipated. But I arrived at the trailhead, which has a restroom and a lot that was full of cars and no bike rack as usual, but I hitched to a wooden fence by the trailhead sign.

Generally, the beginning of the trail is nice and shaded, friendly and accessible to families to take a stroll in the woods, as well as horseback riding. I'm not a horse guy, but if I were, this is a pretty good spot with the shade and lack of mt. bikes, and every horse group I encountered was polite and respectfully yielded the powerful but slower horses. Otherwise, this trail is a nice but longer backdoor entry into RMNP. It's about 4.3 miles to the RMNP boundary, and beautiful uncrowded campsites line the trail. Most of the traffic at this point, if any, are friendly backpackers. Of course, along the way is the Big T as a reliable water source. Continuing on, one can hear the rumble of Lost Falls, and shortly thereafter, just over 8 miles in, reach the fork for Lost Lake or Stormy Peaks. Note that the otherwise reliable and enjoyable "Afoot and Afield" pegs the Lost Lake trail as a 14.3 mile roundtrip, but this cannot be correct. As another aside, it is my observation that "Lost Lake" and "Blue Lake" are the two most common lake names in Colorado.
Anyway, it appears that the (left) fork to Lost Lake is more popular as a backpacking destination, but I wanted to hit tundra, so took the right fork to Stormy Peaks. The pass is designated as 1.6 miles from the fork. Quickly, the trail steepens and switchbacks up above treeline. While a bit rockier, the trail is in great condition, and was being worked on by three young men that had obviously hauled equipment quite far onto the trail. They were tarp camping and had some beer in the river: what more do you need? 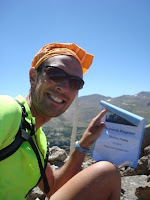 Anyway, the open views into RMNP were stunning, and South Stormy Peaks campsite was the best one of all. I slowed to a fast hike and hiked up to the pass. Here I saw a party of 3, but they were heading to the south for more views. Stormy Peaks are the higher points to the right, so I just headed straight up some boulders to the top. I was rewarded with even better views of both RMNP and Pingree Park, some wind, and a new summit register. Just a few people seem to trickle in every weekend, plus a large party from Wausau, WI (just typing that summons forth the smell of the paper factory when driving throuh that town, but I say that fondly as it was a gateway to going "Up North" as a kid). After some time up top, I headed back down, and found the trail to be quite runnable in this direction (meaning, I was too tired to run up it, but it's quite pleasant to run down).

I stopped at Lost Falls to refill on water, and I met a friendly backpacking couple, Justin and Allison (sp?) from Nebraska. Justin had been coming here for quite some time and said it has gotten busier/more popular, though even I couldn't complain about the crowds. I only had my UV steripen, he offered to let me use his filter, but I wanted to continue the 'experiment' with the steripen only (and my bandanna 'pre-filter') so I knew if it worked on the 3 liters I tried. (Now that it's been over a week, I'm still happy with the results). They were staying until Monday and looks like they had a great weekend of weather. My water gathering and break took a little longer than expected, but soon I was back on the trail for an uninterrupted stretch of a few more hours of running. It was still quite pleasant in the shade and I wasn't in any hurry. I passed a solo hiker and spaced out a bit, as right after passing him I biffed on a small rock, slid forward and dropped my bottles. He asked if I was OK, I was mostly embarrassed at having a witness!

Anyway, all told it was a great ride and run. I look forward to returning and exploring Lost Lake someday.
Posted by mike_hinterberg at 9:43 AM