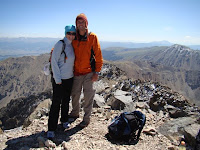 Earlier this summer, Jessica surprised me by saying she had been wanting to climb a "14er", or one of the 54 (more or less) 14,000+ foot mountains in Colorado. Thanks, in no small part, due to my brother-in-laws awesome pictures and description of an early summer snow climb of Longs Peak. Nevermind that she and I never talked about doing (nor even really heard people talking about, other than Whitney) the 12 in California when we lived there...plus a host of others in Mexico, Canada, and Alaska, just to cover North America. As for Central and South America, heck, she was walking around 12k feet in the ruins of Cusco without any special significance. Arbitrary numbers, all. Still, it seems to be a Big Deal in Colorado, probably because one beautiful state hosts so many gorgeous peaks. I thought it was fun to ride up Mt. Evans a few years back, but that was mostly the unique novelty of pavement at 14k feet (and 27 miles of climbing -- ho ho ho!) There are various records loosely kept involving fastest and youngest to "bag" all of these in one season, as well as more unique goals involving ski descents and self-powered visits of every peak. For that reason, summer weekends in Colorado result in dozens or hundreds of people all climbing the same peaks, while nearby "lesser" mountains remain pristine. I've heard and seen nightmare pictures of anthills crowded with people on the standard routes of Front Range mountains, with enough screaming kids, ringing cell phones, jeans and t-shirts to make a mountain seem like Walmart. No thanks! I still feel melancholic when I think about our first and only visit to Yosemite, a place that I dreamed about as the epitome of the "outdoors," only to see crowded lines of cars snaking across the valley floor.
I'm not covering any new ground with these arguments, and it's a Catch-22: It's great to see and promote exercise and enjoyment of nature, I'm just hoping (also) for respect (of other users, and the mountains themselves) and LNT as well.

That said, I was excited to hike one with her, and excited by her enthusiasm, but only if we hiked a non-standard Class 2 route on a non-Front Range mountain, since we would be going on a weekend. That is, not too easy, not too hard, and not too crowded. And, this would be after we did sufficient previous warmup hikes for training, which secretly doubled as good altitude ultra training for me! All of this went well, and we had an enjoyable month of hiking. So I started reading online forums, looking at pictures and routes, and picked up a copy of Gerry Roach's classic. Some friendly folks online suggested La Plata from West Winfield, and it was settled.

We left Fort Collins late -- I was unable to get out of work early -- and made it to Co-390 just after 10pm, after driving through a steady downpour from Frisco down through Leadville. We found an empty pullout on the road, moved gear around, and slept in the car. Just after 5am, with stars but few clouds in the sky, we started getting up, got ready, and drove a few miles to the trailhead; in our case, just after the rough 4x4 road started past the Winfield cemetery, 1.2 miles from the TH. It turns out we easily could have driven the rest of the way, but I didn't want to waste the time finding out, and it wasn't a bad warmup on flat road. At 6:45AM, 3 parties of 2 were ahead of us, and another just starting. We saw the other parties on the way up, but we were still relatively dispersed. The hike from the TH began through dense forest and wildflowers along a creek, very scenic and shaded. Quickly the view opened, and treeline was achieved. After this, we were treated to a wide-open meadow, surrounded by mountain ridges. The meadow, however, included muddy willows, still wet from the previous night's rain, so our feet were already wet just a few hours in. After weaving through the meadows, we approached the most fun part (in my opinion, though opinions vary) of the hike: a switchbacked, steep climb on dirt and scree up a headwall. At the top of this, views were incredible from both sides, and we had a gorgeous tundra ridge-walk towards a boulderfield. 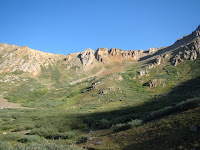 The boulderfield, by unanimous opinion, was not the most popular part of the hike! Last night's precipation up here was formed as snow and ice, still sticking to the rocks. As a broad ridge, there was no imminent danger, just slow going as we picked our way up the rocks. We followed previous parties to the climber's left of the rock, but upon descending, I could confidently suggest staying towards the middle or right, looking for trail and avoiding boulders as much as possible. At the top of this section, which took an hour itself, we were treated to more views, a shifting wind, a false summit which I read about, and a couple getting ready to descend. I asked him about what lie ahead, and he responded, "After the false summit, there's another false summit...and just when you think you're there, there's one more summit!" Fortunately, this situation was almost exactly similar to the northeast ridge of Clark Peak: I knew Jess wasn't a fan of false summits (who is? it's like trick birthday candles...or something), but at least I could relate it to something we've already done. Anyway, so there was more boulder and rock, ungulating toward the top, though the boulders here were easier to stay on top of. Eventually, we crossed paths with an unstable female runner in shorts who asked which way down (probably doing a long out'n'back or loop from the other TH), and we mixed with heavier traffic from the standard trail.

Finally, the summit was achieved! Conveniently, the wind on top was almost non-existent, compared to the ridge below. There were around 8 others or so on the fairly small summit, kind of crowded but everyone had their own space. We met some friendly folks, took pictures and received some in return; counterbalanced by one guy conducting some sort of lame business on his cell phone, and a Boulder uber-couple plotting out their other 14ers in the coming weeks (hey, what's wrong with enjoying *this* one?) After about 10 or 15 minutes, eating breakfast burritoes and taking in the view, we headed back down. The sky was still very forgiving, so we took a break after the boulderfield in a marmot-inhabited meadow, enjoying the sunshine and easier trail. Then, we headed down the headwall, where I had a chance to test my new Brooks Cascadias in a combination of running and scree-skiing (basically, running the straights and sliding into the turns), and I had a blast! Jess didn't enjoy it as much, in tennis shoes, but we'll see next time now that she has hiking boots. By the time we hit the willows, some of the mud had dried out. We stopped again for pictures at the bottom, and got back to the car at 2:30, 8 hours after we started, with maybe an hour of breaks total. 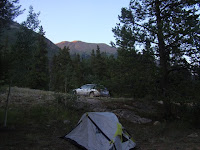 A perfect day on La Plata! And I'll admit, now, that some of the excitement started creeping in, replacing some (but not all) of my weariness and reservation about crowded hiking. It is exciting, I'll admit, to see pictures and stories about specific mountains, which is a byproduct of their popularity. My hats off to those that do all of them, and I hope (and suspect) for many that do them, that's half or a quarter or less of their total hikes in Colorado. In other words, they're doing them in the course of doing all kinds of different mountains. What I'd like to caution against is people that live here, or those that visit from out of town occasionally, and only hike 14ers, by the quickest route possible, on summer weekends: you're doing yourself a disservice by not exploring the other fine options this state has to offer, in all seasons. We loved La Plata, and highly recommend it, but also agreed that Blue Lake/Clark and Pawnee Peak in IP, both <13k feet, were even better. I have no intention of going out of my way to hike specific mountains or not based on their elevation or lack thereof, but there are certainly some beautiful hikes and climbs that are intriguing and I don't want to miss (Chicago Basin, Willow Lake approach, Holy Cross, to name a few), and maybe some of the closer ones by moonlight or by snow. And if Jess, or anybody else going along is stoked too, even better!
Posted by mike_hinterberg at 6:21 AM