A Lucky Fall from Horsetooth

I fell off the Rock on Saturday.
I'm fine, just scrapes and bruises. Considering....everything...could've been much worse.

Here are small pics to spare you if you're squeamish about blood, but clicking on them yields the larger ones: 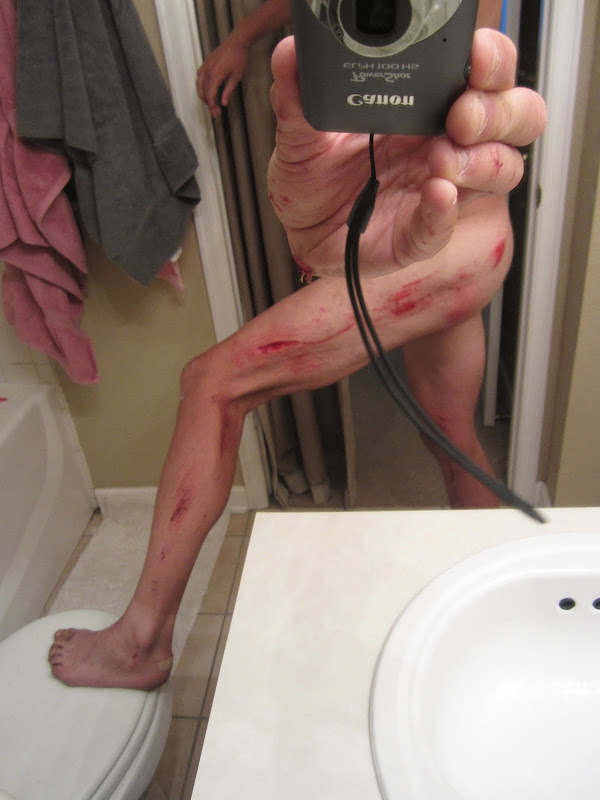 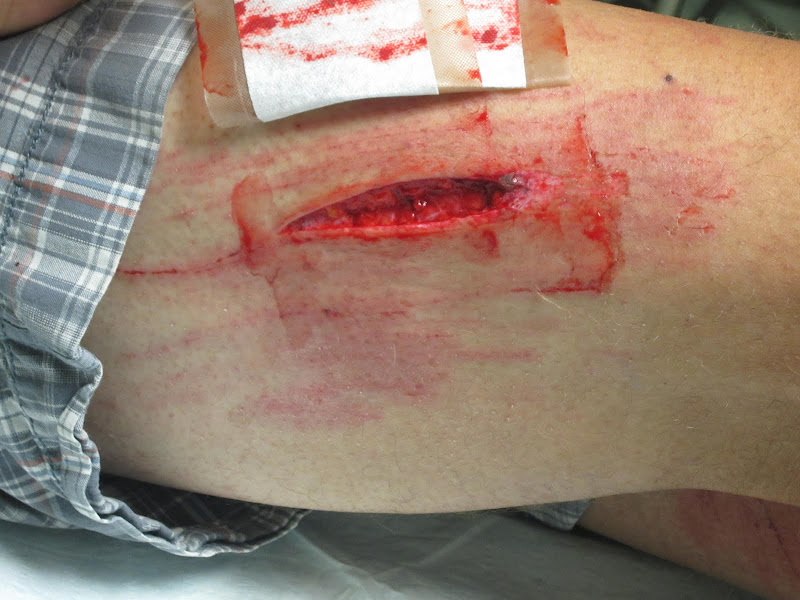 It wasn't a random accident, it was a preventable incident. I overstepped my capabilities and slipped, end of story. Broke the rule -- no, Commandment, really -- about having solid points of contact with the rock. I was lucky to learn my lesson, I'm not laughing it off, I have no excuses, and if anything I hope someone else learns something (or reiterates something they already knew).

24 Hours of Towers was today, so many FCTR folk are heading up and down the iconic, hilly testpiece in a gorgeous September Day. I'm tapering for a race -- remember that? -- so I was looking to join for the premiere lap at 7AM, jog over to the Rock for a weekly summit, and then call it a day.

We had a great group for the morning, alternating between good conversation at a steady pace and Slush and I push each other a bit. At the top, we hung out and cheered on a few more runners, took some pictures, and then Slush, Nick, and I took the Secret Trail over to the Rock. On the way over, Nick and I talked about investigating some Rock options, as we've been excited (spurred by his ideas a few weeks ago) about different climbing routes up the Rock. As you'll recall, there's a South, Middle, and North summit, with the North summit having a trail and light scrambling to the top, while other Class 4 and higher options abound.

We decided to explore the South Rock. Knowing that there are several easy options on the South end, we decided to investigate the North "gap" a bit more, and after sighting a line from the ground and watching Nick lead, it became apparent that it wasn't going to go easily. I wrapped around to the West side of the Rock and it was even more vertical. Cautiously, we abandoned this effort, and made our way to a chimney that Scott had pointed out.

That was a good salvage, as the chimney provided easy and clean passage to the top. It was easier than the Middle Rock is, so it's good, fun practice for that little bit of climbing.

We headed down and decided to explore the south gap of the North tooth a bit further. Nick had done a route recently and was eager to show it. But as we were over there, I tried going a bit further East. It looked like a viable option, except for a tricky move or two near the top, but then it would be home free. But I didn't like the look of it, so I headed down after I wasn't happy with the next move.

Then, unfortunately, I took another glance from below, and convinced myself to give it another try.

I made my way up and was plastered to the side of the rock, but ended up vertical and one good foothold, an OK hand, and the rock bulging slightly towards me. I needed a better 2nd foothold, but it looked like if I pressed myself against the rock and pushed up, I could get a better handhold and then a knee. I got the first hold and moved up, and now I was committed -- I pushed up further with a knee, and then as I tried to bring my foot up, I lost my other foot. I tried lowering myself to regain a foothold and scuttled my feet some more. The rest happened both instantaneously and very drawn-out, but at some point I knew I was going to fall and prepared myself more for that rather than trying to swipe at the rock for more grip.

I kind of fell and slid against the rock. I didn't have time to think or react or shout, but the most distinct sensation was that of incredible speed (mixed with disbelief). I couldn't believe I was moving that fast down rock. I don't know how far I fell or slid, but I was at the incredible mercy of the terrain. I didn't feel like I was at a fatal height, but I didn't spin or flip, and I didn't hit my head, and I didn't break any bones. I didn't twist awkwardly and pull any ligaments. And immediately, I didn't every really hurt.

I shouted to Nick but also myself that "I'm alright" and took more inventory -- scrapes and some blood. I couldn't believe my fortune. I stood up and still felt OK.

Then I noticed a deep gash in my outer thigh -- that one was going to need some attention. It was all the way through the outer layer of skin, revealing gristle underneath like cutting into a piece of chicken, but luckily hadn't penetrated any further. It was only superficial blood vessels that had been affected, so I wasn't bleeding too much.

I tied my shirt around my leg to try to hold the wound closed, and Nick made his way down.

We got off the Rock and headed down. Nick was kind enough to stay with me and made various offers about either getting help or getting the car, which I appreciated, but no other options really seemed to be more expedient than just making our way down on foot, which was unfortunately down to the farther Soderberg TH. I alternated swearing at myself, apologizing to Nick (who saw me fall, which is a painful thing to witness as well) and my wife (who wasn't there but deserved the apology) but otherwise was able to jog back down.
Until today, I had never gotten stitches before, but it was clear to me that would be the preferred treatment. I called J and explained, and I thought the Urgent Care (right by our house) should be sufficient, as I downplayed the fact of it being an emergency. Suspecting that it would be harder to do later and that there wasn't other imminent risk, I took a quick shower to get rid of anything sitting on my skin. I didn't want to get too much water in the wound but the little bit that I did stung like hell, probably worse than anything else.

After the typical American administration portion of the visit (standing in a line, dripping blood, getting my insurance card ready), the rest of the visit was great. The nurse was great and helpful, and a PA stitched me up, kindly engaging me in conversation and answering my questions and describing things to me, along with some comical discussion about the health industry. I was also overdue for a tetanus shot, so that seemed like a good idea.

18 stitches later, and the leg is holding up pretty well. The rest of my body, now that the adrenaline is wearing off, is starting to feel like I went through a wash machine. 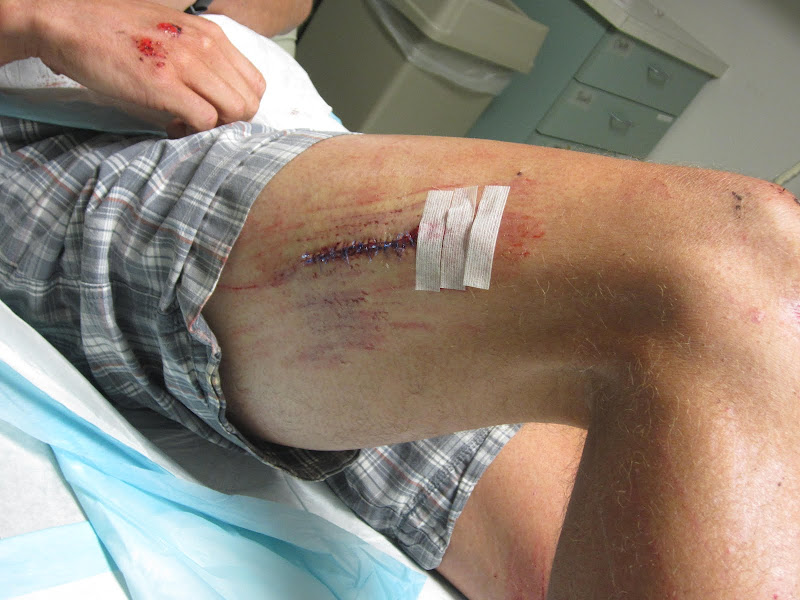 Ironically, I've been pushing myself toward climbing a bit more, and though am very far from competent or talented at it, I've enjoyed being challenged a bit more than the past. However, the lessons here were clear: I stepped too far and "hoped" to make a few moves quickly that took too much of my weight off the rock, rather than sticking to more assured moves that could be reasonably undone. I also ignored my initial instinct to back off -- several times in the last month or so, I've contemplated something a bit more committing, and then backed off to find a better way. I have to remember that, at this point for me, assessing and re-assessing are invaluable. A 3rd point is the fact that I overclimbed my ability because of the presence of another person and my perceived familiarity with the Rock -- a potentially bad fall is still bad when you're with a partner, so it's irrational to risk otherwise. Finally, I was wearing a brand new pair of Cascadia running shoes -- literally the first mile in them started at 7am that morning -- but they are consistently crappy for me in gripping rock, even when new. I had switched to Peregrine Falcons last month and they've made a huge difference, and that's what I've been playing around with in climbing recently, but was only wearing the Cascadias to break them in for running. Shoes aren't an excuse, but the amount of grip you have on the rock (whether from shoes, the composition of the rock, how wet it is, etc.) is part of the larger equation.

Steamboat? Who knows. I'm in no shape to assess that. This was a stupid thing to do before a big race. Jogging down was encouraging, but I expect to hurt for the next few days, and can't really think about it until then. Medical-wise, I did get the approval, which came in waves: first, I asked about activity level (keep weight-bearing and water off of the stitches for a day); then I mentioned wanting to run in a week (she said I'd probably and hopefully heal up quickly). Then my wife blurted out something about "100 miles" and the PA didn't flinch, but basically said avoid re-injuring the same area.

If I'm still hurting in a week, then the whole thing is a sunk cost and we'll go up anyway on vacation. Pain will dictate if I run, and if I can't then I have nothing to prove. Typing this will be a helpful reminder in a few days, but the relief at not being injured worse still exceeds me disappointment at being injured at all. But there's also hope that several days of total and complete rest will heal my body up.

Posted by mike_hinterberg at 6:55 PM