With the weather up high being cooler and windier, it made sense to stay down low closer to the sunnier, drier regions immediately near Buena Vista. The girls wanted a mellow but fun mountain bike ride, so the Midland Trail ended up being a great option.
The Midland Trail is a converted rail trail overlooking the Arkansas River Valley. It's generally fun and manageable for all skill levels, but it's actually a surprisingly good mix of some easy, wide, scenic railroad-grade riding, along with some steeper and slightly technical rolling hills as the trail veers off from the actual railroad bed into undulating singletrack that dips and dives into several arroyo crossings. 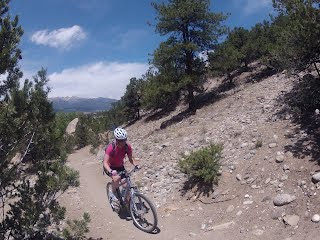 Oh, this trail also serves as a(n) (in)famous section of the Collegiate Peaks Trail Run, which also serves as one of the best online sources of a map of this part of the trail. Most of us think of it as a the place where it's kind of fun to descend gradually, see the leaders heading back up, and then curse the heat when we head out for a 2nd loop.
But that's also to say that I was intimately familiar with this trail, so it was nice to share it with J and Nora.
We headed out for a nice 3-hour ride, covering maybe 14 miles (total out-and-back) with breaks, picture and video-taking, and poking around at some of the railroad ruins, animal bones, and sinkholes along the route -- all things I wouldn't have had time to look at during a race.
So this is even more fun to cruise along on a bike instead of running. However, I ended up running the trail anyway, which was my preference and still quite fun, due to several reasons. First, I was admittedly mileagewhoring for training purposes; second, our bike rack and car only held 2 bikes; and third, my mt. bike is currently in a state of disrepair. I'll get back on the (iron) horse after WS, because it's been too long since I got regular mt. bike riding in, and I have way too many fond memories and fun times on the bike.
Anyway, the girls rode along and chatted while I caught up with them and stole food and water that they were carrying, so it worked out quite well. 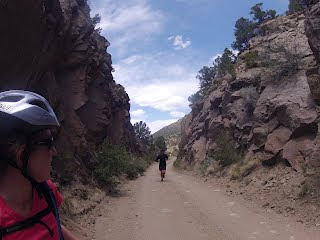 Posted by mike_hinterberg at 10:12 PM