I think it's a great holiday.

In honour of that, I went to the liquor store yesterday, and was pleased to find a variety pack from Sam Adams: 2 bottles each of 6 selections dubbed "Brewers Choice." 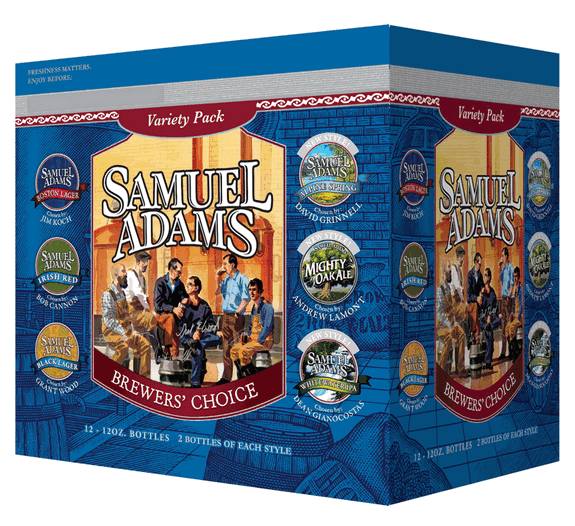 Of course, the classic Boston Lager and Irish Red are more readily available, but the other 4 were new to me. Usually, variety packs will sneak in flavours that end up taking space in the back of the fridge before being pawned off on unsuspecting victims (e.g. New Belgium's Belgo, Breck's Vanilla Porter) I was even more excited because these all seemed like relatively conservative, drinkable styles, more on the malty side of the fence (where I live) -- and no wheat beers! Or, so I was led to believe. Here are my impressions:

Boston Lager: Classic. Perfect all year, especially tomorrow if it's going to be almost 90 degrees along the marathon route -- and you're not running. Maybe even if you are.

Irish Red: Decent, but a little dry at the finish. If I want a cheap faux-micro macrobrew in this style, I'll go with the maltier Killian's every time, but if I want one of the best beers on Earth, it's hard to pass up the local Equinox O'Rion Irish Red, 2011 GABF gold winner.

Black Lager: I was excited about this beer, and expected something similar to Dixie's Voodoo Blackened Lager. Instead, I was surprised to find that it was a bit darker and more caramel-flavoured, almost like a less-heavy 1554 (which isn't too heavy to begin with), which is a solid effort on Sam Adams' part.

Alpine Spring: I didn't have much of an idea of what to expect here, but this unfiltered lager ended up being my favourite of the batch. As cloudy as you'd expect, but crisp, clean, and drinkable, I would compare it to New Glarus's Totally Naked...expect you can't buy New Glarus outside of Wisconsin and sneaky border towns. The description notes a hint of citrus but I didn't taste it, which is even better because it keeps it simple. I would pick this beer up occasionally during the summer if they sold it standalone.

Mighty Oak Ale: I had high hopes for this patriotic-sounding oak-aged beer, but was left disappointed by a cloying vanilla taste. I don't know if vanilla has ever worked for me in a beer: Breckenridge tries to balance it out with more of a chocolate flavour, while Great Divide adds a bunch of alcohol to some of their imperials to try to make you forget. This is obviously lighter than both of those, trying to be more of a drinkable session beer, but it's not a taste you want to repeat more than once in a sitting.

Whitewater IPA: I'm not a classic Western Hophead (subspecies of American beer drinker that lives between the Pacific Ocean and Colorado; distant cousins with a rogue sect that lives in Michigan), but certainly enjoy the right pale ale with a pizza or something spicy. When I pulled a bottle out and noticed the cloudiness, I thought something was amiss, and when I read the label, I learned it's actually a hoppy white ale, so the name is more about the ingredients than the summer river kayak adventure that I was led to believe. As it's also flavoured with apricot, it's going to draw an immediate comparison to Pyramid, which I've had maybe once several years ago. I'm not the best judge on this style, then, because I've been disappointed too many times in the past when somebody offers me a beer in their house, and all they have is Blue Moon, but surprisingly the extra hoppiness of the Whitewater IPA serves as an almost-suitable balance to the wheat unrighteousness. If this is all you have in your fridge, I might still help you with it.

Anyway, hope that helps you celebrate Patriot's Day in style!
Posted by mike_hinterberg at 12:42 PM