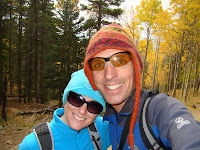 My girl, my girl, where will you go?
I'm going where the cold wind blows.

In the pines, in the pines,
Where the sun don't ever shine.
I would shiver the whole night through

Nirvana, "Where Did you Sleep Last Night?", lyrics from older folk song

This year's aspen showing seemed a bit down from previous years. Admittedly, we were out of town during the peak for much of the state. Still, yesterday's drive through the Poudre Canyon showed that peak was definitely passed, but there were still some spectacular stands remaining.

We love the Pingree Park area, but hadn't explored Buckhorn very much. The only time I'd been up 44H itself, in fact, was almost a year ago, when Caleb and I did a brief scouting of Moody Hill on Thanksgiving Day. From then, it was clear that this area had more potential. I had, though, done some rides on Old Flowers, and heard that Steve and some boyz hit up White Pine a few weeks ago. This by itself sounded like a good mellow hike for today.

Looking out the window at 7AM, there was a solid line of clouds sweeping across the foothills, north to south, but there was an interesting gap just behind them. With luck, we would hit some good weather back there. We took our time getting ready -- the only threat this time of year is rain and cold, but at least not lightning -- and got to the ranger station around 9.

Sure enough, the clouds were breaking enough to let some sun through, and we didn't need winter jackets. It was truly a fall-like 43 degrees, quite pleasant. We took our time heading up the jeep road; I would like to return to challenge it on a mt. bike, as I couldn't find any one spot that was too intimidating with proper planning and tacky soil, but the whole climb, in total, certainly is a beast. Partway up, on the side of the road, we saw some glittering: mica! My geonerd brother-in-law taught me this, and I was surprisingly excited at collecting some. In just over an hour and 15 minutes, we found ourselves at the top, and enjoyed a nice break in the sun as the fog rolled in the distance: 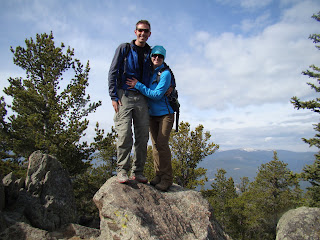 Before the clouds completely socked in the west, we had great views of the Mummy Range 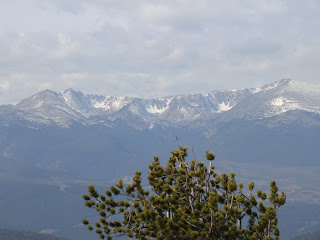 and we headed back down, again taking our time and enjoying the leafy road and some of the still brilliant aspen. 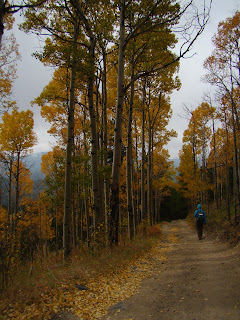 We also checked out the trail leading directly north of the white pine saddle, which eventually connects to Old Flowers. This singletrack looked clean and awesome as it rolled over a bed of pine needles, and there were some nice campsites offset from the road. Definitely worth a future visit!

Near the bottom, there is one intriguing, large boulder just off the side of the trail, that I spotted on the way up. Not being in a hurry, I played around on it. 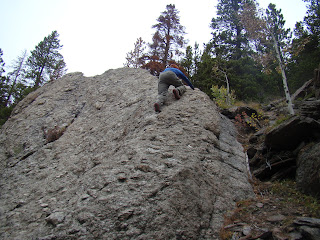 It was quite solid and fun to practice on, but I still have a hard time downclimbing. Need to practice that more. Interestingly, I descended on an easier, slightly mre reddish rock next to it, which ended up being more flaky. I'll have to ask Caleb what's up with that.

We made it back down and saw a few more folks headed up, but all in all a nice stroll in the woods. The road isn't too rocky, so it might be worth a future ski visit. Before we left, we looked at the trailhead for Donner Pass. This trail has always intrigued me: first, based on the name, but also because it's not overly popular. There's definitely more stuff to check out in this area!
Posted by mike_hinterberg at 10:13 PM