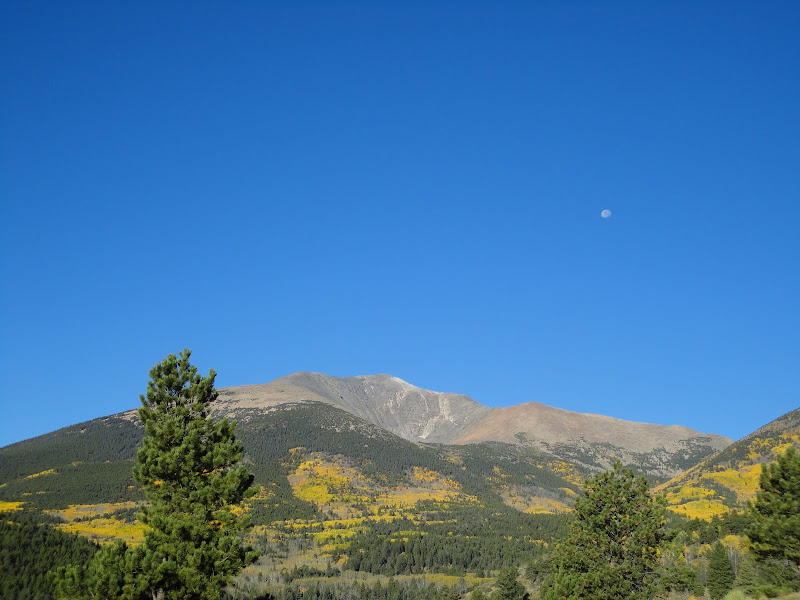 Again, hoping to see more aspen, J and I took a (long) day-trip down to Mt. Ouray.

Mt. Ouray is a centennial 13er at the Southern end of the Sawatch range. I had it on 'the list' for awhile since it was scenic, high, and uncrowded, and had an interesting route through bristlecone forest, an open mountain cirque, and then a gorgeous ridge to the top.
Still, I had debated the night before on mountains and routes: J didn't want something too steep and long or scrambly; I have a perpetual aversion to crowds; and I wasn't sure if there were even any significant aspen in the area (I only knew about the bristlecone), and how impressive they would be (yeah, that's how picky I am), since there aren't enough pictures of Mt. Ouray in the fall. But, I found some great recommendations and pictures of Marshall Pass Rd, and luckily, it ended up being fabulously gorgeous. Unluckily, it ended up being steeper and slower than advertised: partly Roach's fault (he called it Class 1+, which I told J and based timing assumptions, though there was non-trivial talus hopping, which is why Summitpost calls it Class 2), partly our fault (we ended up going down more talus on the way down while chatting and not paying attention), and mostly my fault (because I have a selective memory on things like this and tend to downplay length/difficulty!)

Anyway, for the second wknd in a row, we headed down 285, south past Poncha Springs.
Now that it was daylight, with a waning gibbous moon waning gibbously, we could see Mt. Ouray from several miles away. 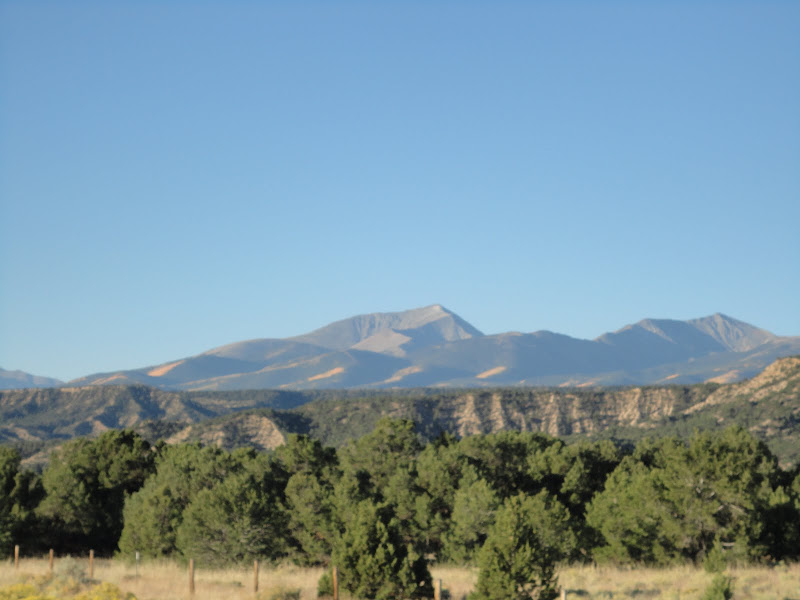 Nice. I like mountains that look cool from a distance, have a decent prominence, and when you hike in the direction of their best presentation, so you can stare at it for hours.

Two other cars were in the small parking lot at the Gray's Creek trail. Within the first half mile, we saw a couple and their dog, from the Springs, heading back to the TH. They had camped their for the night, not knowing it was a trailhead, then heard about the trail (presumably from the people in the other car), decided to hike up a bit, then turned around when the trail became lost at numerous creek crossings. I showed him the map and stats, they were in good spirits and decided to go mt. biking instead anyway, but J articulated to me, later, what I was also thinking about waking up and randomly deciding to do a hike of indeterminate length and difficulty without a map, etc. (Then again, I guess we did that for millions of years, and as long as you turn around when things get dicey...)

Indeed, the trail crossed the creek a few times right around a mile, and pretty much disappeared, but we stayed mostly North and followed the creek right up, and after 10-15 minutes a trail was easily discernible again. We wound our way through some nice aspen, steadily climbing upward in through the gulch: 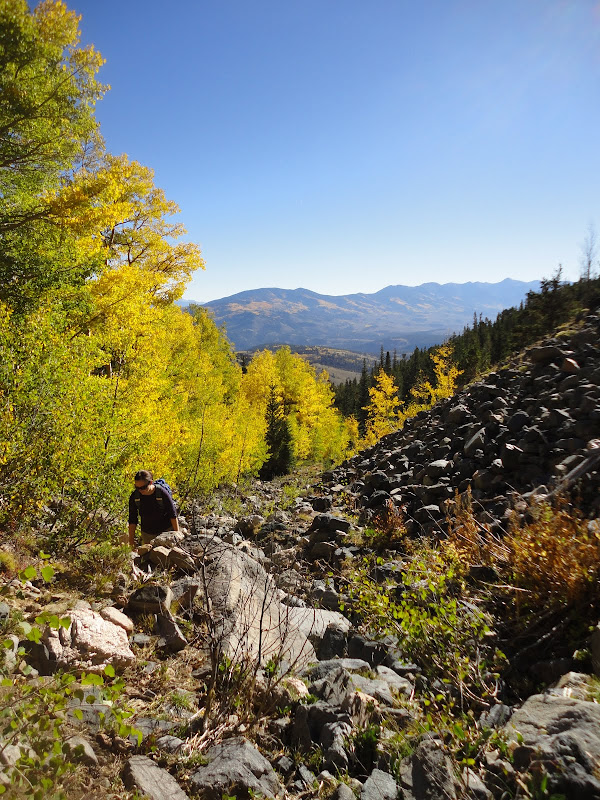 J started asking if the steepness relented -- it's pretty much 1k/mile the whole way -- and wasn't too happy with how hot it was for the end of September, when I was paranoid about having gloves, hat, etc. I tried to offer my sympathy, but since I was shirtless already, it probably wasn't too helpful. Permanent note to J: non-cotton t-shirt or tank-top is *never* a bad layer to have!

Alright, the trail got a little rockier as we got closer to treeline. Then, we reached the famous bristlecone forest, something I was looking forward to...

...in no small part because it reminds me of "The Legend of Zelda" 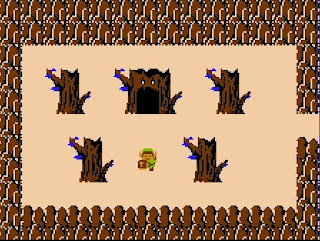 (BTW, I couldn't find any images of that online, so I had to spend 15 minutes going online to play it, then get a screen capture, just for your enjoyment. OH, and, while I did my capture, I only had one heart left, so the game kept beeping at me. You're welcome.)

Just a bit further up, and the entire cirque was visible, called the "Devil's Armchair."

Mt. Ouray is the high point in the middle. This route finds the easiest path up to the saddle to the left of the summit. To the right (Northeast of Mt. Ouray) is a big heap of scree that can serve as an alternative route along its shoulder. A descent there would make a fabulous Tour d'Ouray, but J called "no scree" so we didn't head that way.

Anyway, the half-mile grunt up to the saddle is a mixture of talus, faint trail, and tundra ramp. Take your pick!

We wound our way up to the ridge, leisurely. Did I mention there was essentially no wind and no clouds? Awesome weather. Once on the ridge, there was a faint climbing trail that zigzagged through the talus. Some bad news, though: several obvious false summits. I tried to remind J how quickly each little hump went by, 10-15 minutes or so, then the next one. Just moving forward. The trail actually winds around the backside of the ridge now, exposing new views to the West. Here, we actually saw a group of people descending. I apologized for 'crowding' the mountain, but we all laughed at the great day. And pushed forward, one hump of talus at a time.

Finally, the summit was achieved. 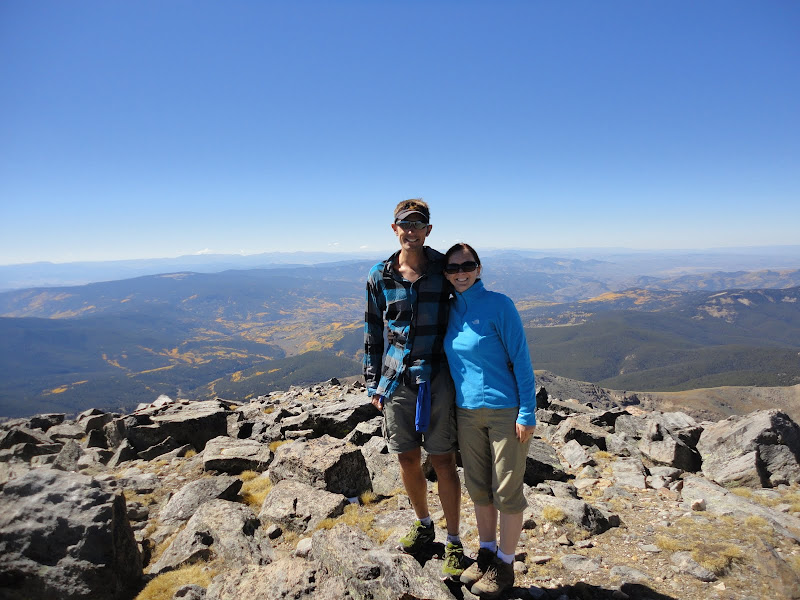 We shared the summit with a group of women, friends from various parts of the state that met to climb some 13ers the day before (Webster Pass ridge run to Horseshoe), then had taken the East ridge route (back side of the cirque) up to Mt. Ouray, while their respective husbands were toiling away at respective home projects.

J and I were able to sit right on the summit for half an hour, enjoying leftover pizza and Red Bull. Heaven!

J's spirits were better now and she enjoyed the descent, which is good as I worried I had pushed her into a longer hike and she wasn't enjoying it. I told her we went to 13,970+ feet, so basically 14 -- she had thought the whole time that we were on a 14er (since I was telling her about advantages/disadvantages of some options the night before). I told her we were less than 30 feet short -- also, note the lack of people -- did that bother or affect anything at all? "No," she replied, and I love her for it. Then she admitted enjoying the hike, but she's ready for some more "rolling, over the river and through the woods" hikes instead. I know what she means.

As I mentioned, we ended up going past the saddle and just decided to head straight down the talus. No biggie, a little slower but somewhat shorter and more interesting. Back into the gulch by line of sight, and we picked the trail up again.

End of September, and we were both sunburned! We looked forward to reaching treeline in this direction as well.
Now it was afternoon, and the aspens were even brighter: 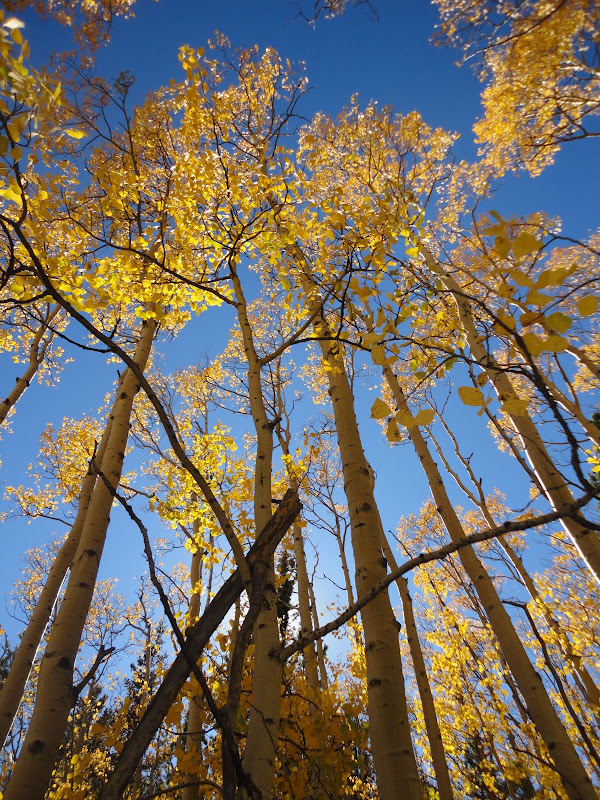 Even though it was windless, it seemed like the trail was more covered in solid leaves, so you could "sense" a trail was there more than you could actually see it. 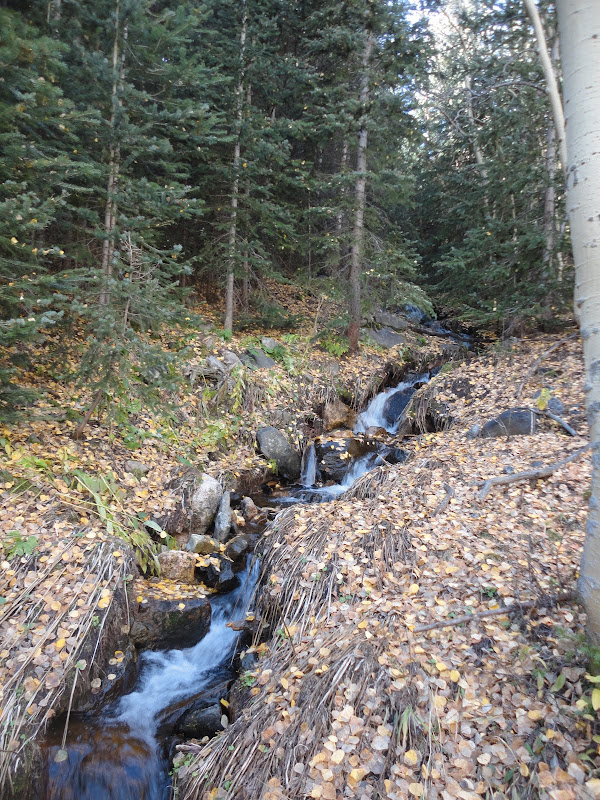 Back to the car, turns out almost 7 hours went by. We enjoyed even more views of the aspen... 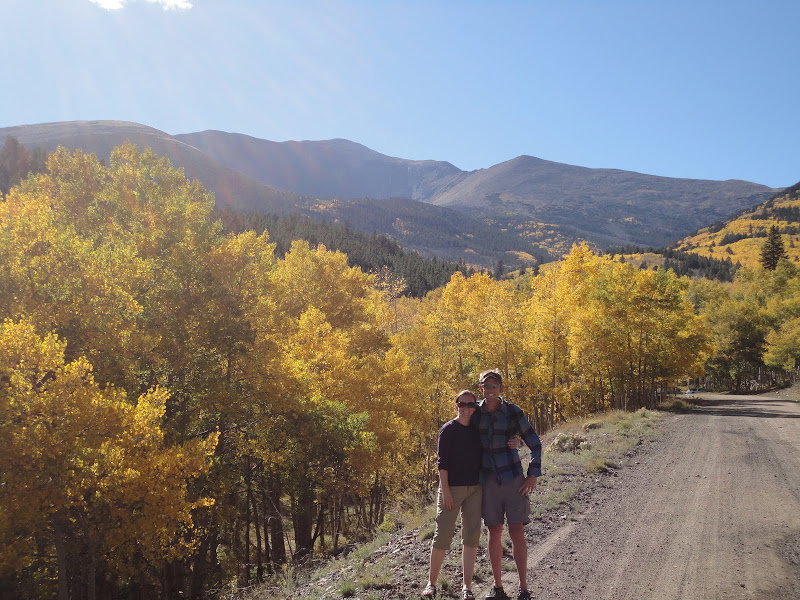 ...before the planned apres-hike food and drink at Eddyline. Yum!

A great day in the mountains with my favorite girl, how lucky can I be, 2 days before our 8th wedding anniversary!
Posted by mike_hinterberg at 10:50 PM