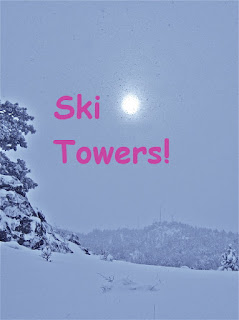 I've had my eye on this one for a long time: the snaking, La Tour Couloir that threads it's way 1800' down the burly West Ridge of Horsetooth Mountain.  But I knew conditions had to be just right for a summit bid and ski: mostly, that it had sufficient snow and wasn't plowed for maintenance, which would lead to dangerously thin conditions and rock exposure. On very rare occasions, there's a shot in December or January, but due to a late snowstorm this year, I knew we had something special going on.  If I were able to pull it off, it likely would have been the latest in the season that anyone has been able to make this attempt.  I owed it to myself, and to the long history of Fort Collins ski mountaineers, to at least try.

Arriving at the parking lot late in the afternoon, I was heartened to see that, indeed, there was enough snow for an attempt.  No more excuses.

Having survived the initially dicey, horizontal Soderberg Traverse, which involved a bit of tricky routefinding due to the conditions, I began the steady and challenging climb upward.  There were some tracks ahead of me, which buoyed my spirits, but as I rounded the corner, I realized I was chasing a ghost. 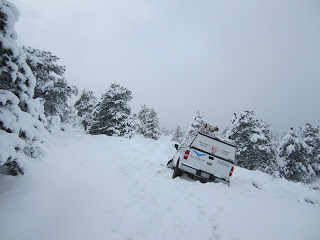 Indeed, a 4WD truck with chains had abandoned the attempt fairly early in the game.  Fortunately, notes on the window hinted of survivors.  I pressed on.

Still, I followed a snowshoe track, and what looked like human footprints.  My next sign of life was an orange, "Tough Mudder" headband on the Stout and Towers intersection. 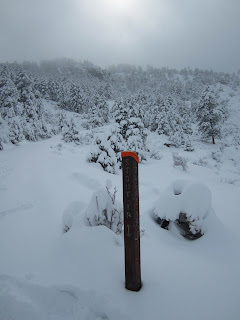 I was pretty sure it was one of the first two.  I continued on, in the darkening, sunless sky, with a grim and sober respect for the trail. 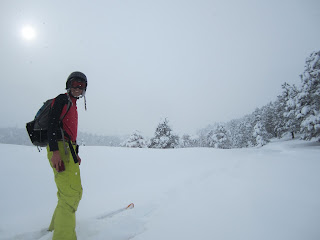 Finally, I heard what sounded like voices...and saw two runners bounding down the trail.  One of them wore an orange headband, while the other did not.  Shortly after, I saw where the footprints ended.  The mystery, and the snow, deepened.  Indeed, the summit was inaccessible without flotation. 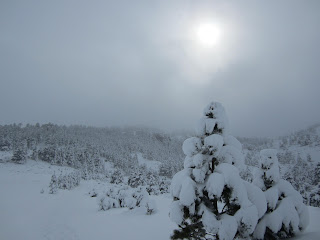 But the snowshoe tracks continued.  And then, in the last mile, I saw him, surveying the surroundings.  I introduced myself to the fellow mountaineer, Luis, and asked if he wanted to press on together for the summit bid.

"I can't," he replied, with a deep sense of regret.  "I'm already late for dinner with my wife."

I nodded a sympathetically wistful nod.  I knew he had difficulty making the choice, and could tell he matured beyond the usual string of disappointments that are part of the game.  I thought of my own wife, nervously awaiting news of my latest folly.  It's the ones who are left behind that suffer.

But I had to press on.  Worse, I now had to break my own trail.  I pushed up the final hills, with some grades exceeding 10 degrees -- dangerously close to the 38 degree critical angle of slope stability.

But I did it.  And it felt like standing on top of the world. 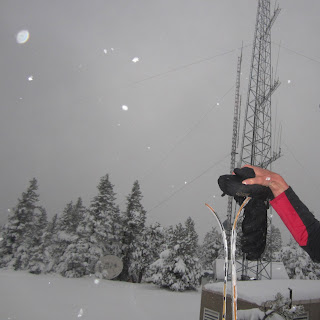 Now, it was time for the descent.  The moment of truth, literally.

*
And in all seriousness...
The spring snow was sticky enough to scrub off speed.  All speed, or semblance of it.  And clump up on my skis, repeatedly.
I did not see any wildlife on the way down, but I did think about mountain lions every time I bent down to clean or clip into my skis (the same way I do if on the ground working on my bike), generally trying to stay upright, move around, watch my back, and make noise.  Paranoia? I remember reading about a ski encounter when a skier was on the ground with her skis...and then we got an email that a trail runner so 3 mountain lions(!) on the same trail the very next night!  Be safe out there and stay upright!

Anyway, I took some video of the descent, but haven't really edited it, mostly out of disdain and abject boredom.  In all but the steepest hills, I had to double-pole to keep moving, and the best hill is probably the first one closest to the trailhead.  It still took an hour to descend.  It was pretty boring and only deepens my feelings towards Towers Road in general.  But now I know.
Posted by mike_hinterberg at 1:13 PM